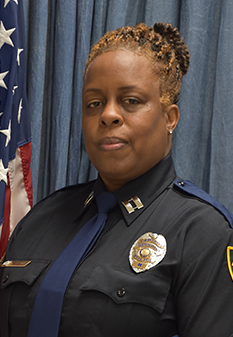 Captain Doyle has over 33 years of law enforcement experience.  She began training at the Birmingham Police Academy on September 28, 1987. She has worked a variety of assignments including; Patrol, Commercial Area Patrol, Burglary/General and Family Services.  In 1997, she was promoted to the rank of Sergeant and reassigned from the Detective Bureau to the East Precinct within the Patrol Bureau.

Anja Doyle was promoted to the rank of Captain on December 18, 2020.  She is assigned to the West Precinct.

In her spare time Captain Doyle enjoys traveling with, and cooking for, her family.