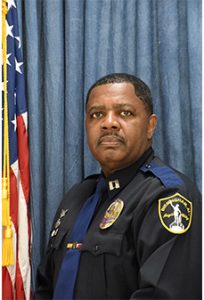 Captain Onree J. Pruitt Jr. is a 26-year veteran of the Birmingham Police Department. He began his law enforcement career in 1996. After graduating from the Birmingham Police Academy, he was assigned to the East Precinct. During that time, he served as a Patrol Officer and Task Force Officer. In 2002, he was transferred to the Tactical Operations Unit and assigned to the Warrant Detail. As a Tactical Officer, he held Federal and State Instructor Certifications. Additionally, he was often tasked with instructing in-service patrol officers and academy recruits in Basic Building Search Techniques Training, Riot Control Tactics, Active Shooter Response Training and Basic/Advanced SWAT Training.

In 2008, he was promoted to the rank of Sergeant. In the following years he had the opportunity to supervise officers assigned to the North Precinct, North Task Force, Freeway Patrol Unit, Warrant Detail, Hit and Run, Burglary Unit Detectives, Auto Theft Unit Detectives, and Internal Affairs Division Investigators. While assigned as a sergeant to the Tactical Operations Unit he served as a SWAT Instructor and Operator, Entry Team Leader, and Bomb Commander/Technician. Captain Pruitt was often requested to instruct Birmingham Police Academy Recruits, Birmingham Police Explorers, and Citizen Police Academy Classes in various policing subject matters.

Captain Pruitt was educated in the Birmingham City Schools System and a graduate of West End High School. He earned a Bachelor of Science Degree in Criminal Justice and a minor in Psychology from the University of Alabama, Birmingham. He has completed the Jefferson County Personnel Board’s Supervisory Certificate Program and the City of Birmingham Supervisory/Management Program. In 2019, he was promoted to the rank of Lieutenant and assigned to the West Precinct as Evening Shift Watch Commander.  In 2020, he was assigned to the Birmingham Police Academy as the Director of Personnel Hiring and Recruit Training. In 2021, he was reassigned as Executive Assistant to the Deputy Chief of Special Operations Bureau.  In August of 2022, he was promoted to the rank of Captain and currently serves as Commander of the Vice/Narcotics Division.