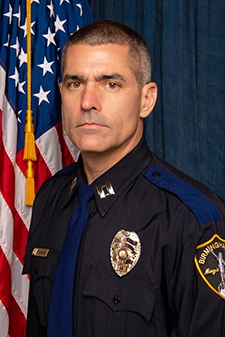 Captain Thurmond began his career in the patrol division at the North Precinct where he served the Titusville and Smithfield communities from 1999-2005 as patrolman and Field Training Officer. In 2005, he was assigned to the Burglary Unit in the detective bureau where he served the citizens of the East Precinct. Two years later, in 2007, Captain Thurmond was promoted to the rank of Sergeant and assigned to the West Precinct Morning Shift in the patrol division.

In 2008, he was transferred to the Homicide Unit in the Investigative Bureau and worked there as a sergeant until 2013 when he was then promoted to the rank of Lieutenant. Upon being promoted to Lieutenant, he was transferred to the South Precinct as the Day Shift Patrol Commander. In 2015, Captain Thurmond returned to the Homicide Unit as the commander of that unit. In 2018, he became the Interim Commander of the newly formed Robbery/Homicide Division which consists of seven (7) individual units; Homicide Unit, Felony Assault Unit, Robbery Unit, Crime Reduction Team (CRT), Project ICE, Intelligence Unit and the Sex Offender Unit. In 2019, he was promoted to the rank of Captain and served as the West Precinct Commander in the Patrol Bureau. Captain Thurmond is currently the Executive Assistant to the Deputy Chief of the Investigative Bureau.