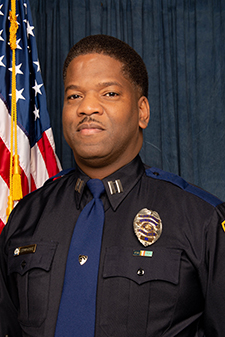 Captain Edwards has a Bachelor of Science Degree in Criminal Justice from University of Alabama at Birmingham where he was awarded Distinguished Graduate of the Reserve Officers Training Corps (ROTC).  He has a Master of Science in Criminal Justice from Faulkner University in Montgomery.  He is a graduate of the distinguished FBI National Academy and the Southeastern Law Enforcement Executive Development Course. He is a member of the International Association of Chiefs of Police.  He served part time as an Adjunct Professor at Miles College from 2013-2015. Captain Edwards served over 22 years in the United States Army Reserves retiring at the rank of Major in 2010.  He is currently the founder and Pastor of Empowerment Word Church in Alabaster.