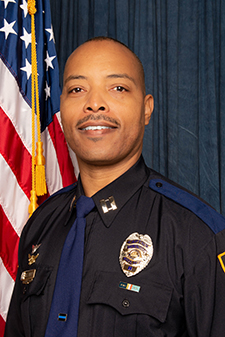 Theophilus was educated in the Birmingham City Schools system and a graduate of the Ramsay Alternative High School. He has earned a Bachelor of Science Degree in Homeland Security, and a Master’s Degree in Justice Administration. He is a graduate of the FBI National Academy Session Number 258. He holds certifications in various law enforcement professional courses and instructor certifications. He is also a member of several law enforcement professional organizations.

Theophilus is a lifelong member of the New Pilgrim Missionary Baptist Church where he assists with various committees and is a member of the Singing Churchmen. He is Life Member of the Omega Psi Phi Fraternity, Inc., and a proud Veteran of the United States Marine Corps.