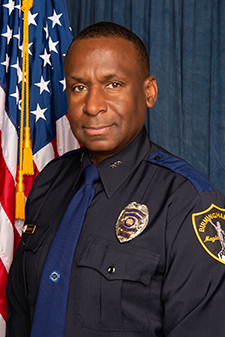 Deputy Chief Davenport joined the Los Angeles Police Department in 1988; however, his introduction to the Department did not start there. At age 12, He joined the Wilshire Area Deputy Auxiliary Police program and remained there until he transitioned to the Law Enforcement Scout Program at Southwest Area when he was only14 years old. Davenport never imagined that 30 years later, he would return to Southwest Area as Officer-In-Charge of the Gang Impact Team and later the Commanding Officer of the Southwest Area Detective Division.

Davenport’s career has not been without challenges and triumphs. In 1993, Davenport was the recipient of the Medal of Valor. Although shot twice, Davenport re-exposed himself to additional gun fire as a suspect began to approach his partner. Together, Davenport and his partner were able to ward off the suspect resulting in the suspect fleeing.

Deputy Chief Davenport has worked a variety of assignments including patrol, detectives and administration. He is committed to improving the working conditions for all employees as well as the Birmingham Police Department’s visibility and relationship within the community.

Deputy Chief Darnell Davenport joined the Birmingham Police Department on February 16, 2019. He is currently assigned as the Deputy Chief of Patrol Operations.