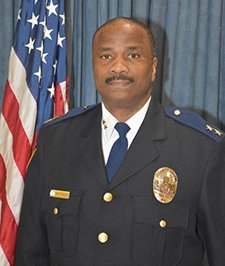 Smith’s last assignment with the LAPD was Detective III Supervisor for Commercial Crimes Division, Detective Bureau, where he supervised all aspects of law enforcement, investigations, and training. Smith managed both sworn and civilian employees, as well as oversaw the Peace Officer Standard and Training (POST) 40-hour Auto Theft School, which is attended by law enforcement agents from around the world.

Smith was born in Los Angeles, California and raised in Cerritos, California, and graduated from Cerritos High School. Smith continued his education at California State University, Long Beach where he studied Communications.

Smith is no stranger to Alabama or hard work; his father and mother were born and raised in Birmingham and Demopolis respectfully. As a youth, Smith spent every summer tending to the family farm.

Deputy Chief Smith proudly joined the Birmingham Police Department on February 1, 2021, as Chief of Detectives in Investigative Bureau. Deputy Chief Smith is fully committed to strengthening relationships with our community members, improving the working conditions for all employees, and improving the overall safety for the citizens of Birmingham.