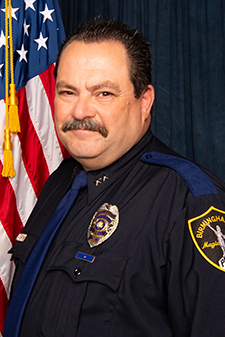 Deputy Chief Scott Praytor has been with the Birmingham Police Department for 28 years. He began his career at the West Precinct as a patrol officer from 1991 to 1998. He transferred to the Burglary Unit where he worked as a detective for less than a year before transferring to the Homicide Unit in February of 1999. Captain Praytor worked as an investigator in Homicide until he was promoted to Sergeant in 2002. He remained in Homicide as a supervisor until his promotion to Lieutenant in 2008. After promotion, he became the commander of the Homicide Unit, serving in that position until his promotion to Captain in 2013. Since being promoted to Captain he served as the commander of the Crimes against Persons Division in the Investigative Bureau until 2018 and later Executive Assistant to the Deputy Chief of Investigations.  In October of 2019, Captain Praytor was promoted to Deputy Chief of the Investigations Bureau.