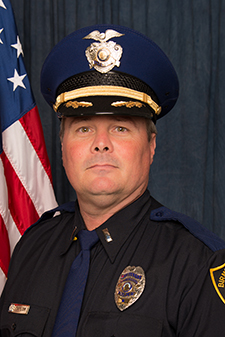 Executive Commander Lee M. Taylor was born in Birmingham, Alabama and grew up in several parts of Jefferson County. He graduated from Gardendale High School in 1988, and has continued his education through numerous work related courses over the years, but most recently is pursuing a degree in secondary education. Executive Commander Taylor has been married for 27 years and has two children.

In 2008, he was promoted to the rank of sergeant and worked a variety of assignments including: field supervisor, task force supervisor, and special operations supervisor in the Western Precinct; detective supervisor of day-to-day operations in the Robbery Division of the Investigative Bureau; and Range Master in charge of all firearms and driver training for new recruits and in-service officers.

In 2018, he was promoted to Lieutenant and assigned to the Western Precinct as a shift commander. After a short tour, he was assigned as the Executive Commander of the Tactical Division where he is tasked with coordinating day-to-day operations of Motor Scouts, Mounted Patrol, Freeway Patrol, Patrol K9, TSA K9, SWAT, and coordinating police resources for over 225 major events, races, marches, protests, demonstrations, and street closures annually.  Lt. Taylor is currently serving as the East Precinct Day Shift Commander.