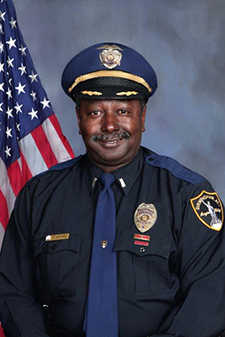 Lieutenant Curtis Mitchell, Jr. is serving as the Security Services/ Records/ Property Room Commander since July of 2020. Lieutenant Mitchell is a native of Birmingham, Alabama. He has 38 years of law enforcement experience with the City of Birmingham Police Department. He started his career in 1983, and has served as a patrolman in all four precincts, a Homicide detective, a sergeant in three precincts and Robbery Unit, a commander at West Precinct Evening Shift, and commander of the Robbery Unit. He is also a member of the Alabama Army National Guard of 38 years of service where he holds the rank of Sergeant First Class.

Lieutenant Mitchell has a Bachelor’s of Science Degree in Criminal Justice Administration from Columbia Southern University, Orange Beach, AL.  Lieutenant Mitchell has received numerous awards for service over his career with Birmingham Police Department. He was the recipient of two Life Saving Awards, the Department’s Combat Star, Officer of the Month Award in September of 2006, and Officer of the Year in 2007.

Lieutenant Mitchell is a member of Macedonia Missionary Baptist Church in Ensley, W. M. Norwood is the pastor. He is married and the father of one daughter and five sons.