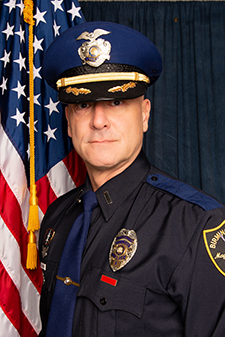 Before joining the Birmingham Police Department in 2001, Lieutenant Alexander served his country as a United States Marine Staff Non-Commissioned Officer on active duty.  In his almost nineteen years of service in the Birmingham Police Department, Lieutenant Alexander has been assigned to many and various duties. As an Officer assigned to the East Precinct Patrol Division, he was selected for and served as a Field Training Officer (Corporal), a Traffic Homicide Investigator, and as a Task Force Officer.  He was then transferred to the Birmingham Police Academy as a Range Instructor before being promoted to the rank of Sergeant.  As a Sergeant, he was assigned to both North and West Precincts as a Patrol Supervisor. He was also appointed as the West Precinct Task Force Sergeant before his assignment to the Support Services Division at the Police Headquarters.  Upon his promotion to Lieutenant in 2019, Lieutenant Alexander was transferred again at East Precinct as a Watch Commander.  Currently, Lt. Alexander is assigned to Custody Services Division.

Lieutenant Alexander holds an Associates Degree in Criminal Justice from Columbia Southern University and is currently completing his Bachelor’s Degree in Criminal Justice Administration. He holds a great many professional law enforcement certificates and qualifications to include; The University of North Florida, Traffic Accident Reconstruction, Basic and Advanced S.W.A.T. Certificates, the F.B.I. Firearms Instructor, and Instructor Development credentials to name a few.

During his career with the Birmingham Police Department, Lieutenant Alexander has been awarded two Life Saving Medals for Heroism in the performance of his duties. He was also twice nominated for, and received proclamations from the State of Alabama, House of Representatives for the State of Alabama Medal of Valor. He has also received several Certificates of Commendation from the Police Department, and other outside agencies, for his outstanding performance of duty.  Upon his promotion to Lieutenant, Lt. Alexander has served as a Watch Commander at East Precinct, and the Executive Officer of the Tactical Operations Unit.