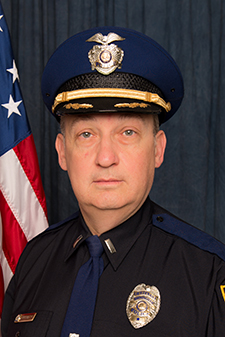 Harry Greenberg is a Lieutenant with the Birmingham Police Department who has over 29 years of law enforcement experience and service to the community. He has held numerous assignments over the years and is currently assigned to the Deputy Chief’s staff as the commander of the Birmingham City Jail.

After graduating from Birmingham-Southern College he began his career with the Birmingham Police Department in 1989 as a patrolman assigned to the North Precinct. He was reassigned to the Detective Bureau in 1995 and has 14 years of investigative experience that include assignments in the Burglary Division, White Collar Crime Unit and Internal Affairs Division. He has also been a State of Alabama licensed polygraph examiner since 2005 conducting criminal, administrative and pre-employment polygraph examinations.

In 2008 he was promoted to the rank of Lieutenant and was assigned to the South Precinct as a shift commander followed by being assigned as the commander of the Crime Scene Unit in 2011. In 2018 he was assigned to the Deputy Chief’s staff. Lieutenant Greenberg has a wide array of law enforcement training certifications that include patrol techniques, Net control, National Incident Management Systems, investigative techniques, supervisory and management techniques, polygraph examination and risk management.