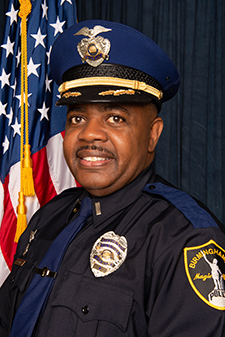 Lieutenant Onree J. Pruitt Jr. is a 23 year veteran of the Birmingham Police Department. He began his law enforcement career in 1996. After graduating from the Birmingham Police Academy he was assigned to the East Precinct. During that time he served as a Patrol Officer and Task Force Officer. In 2002, he was transferred to the Tactical Operations Unit and assigned to the Warrant Detail. As a Tactical Officer, he held Federal and State Instructor Certifications. Additionally, he was often tasked with instructing in-service patrol officers and academy recruits in Basic Building Search Techniques Training, Riot Control Tactics, Active Shooter Response Training and Basic/Advanced SWAT Training.

Lieutenant Pruitt was educated in the Birmingham City Schools System and a graduate of West End High School. He earned a Bachelor of Science Degree in Criminal Justice and a minor in Psychology from the University of Alabama, Birmingham. He has completed the Jefferson County Personnel Board’s Supervisory Certificate Program and the City of Birmingham Supervisory/Management Program. He has also received a Leading People and Leading Process Certificate from the Jefferson County Personnel Board. In 2019, he was promoted to the rank of Lieutenant and assigned to the West Precinct as Evening Shift Watch Commander.  In July 2020, he was assigned to the Birmingham Police Academy as the Director of Personnel Hiring and Training. In January of 2022, he was reassigned as Executive Assistant to the Deputy Chief of Special Operations Bureau.

Lieutenant Pruitt and his family are members of Church of the Highlands, where serving others is a priority and pleasure.