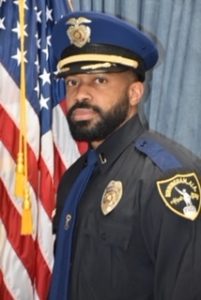 Deputy Chief Michael Pickett is the Chief of the department’s Special Operations Bureau.  He is a Birmingham native who joined the Birmingham Police Department in 2004.  After graduating from police academy, he was assigned to West Precinct where he later became a Field Training Officer.

In 2010, Deputy Chief Pickett was assigned to the City Wide Task Force. During this assignment, he was tasked with identifying  crime trends and apprehending burglary and robbery suspects by using intelligence-led mapping and tracking methods.

In 2011, while working in investigations, Deputy Chief Pickett was assigned to the elite Crime Reduction Team (C.R.T.) where he worked as a federal task force officer with the United States Marshals Service.  He was tasked with planning high risk operations to apprehend some of the city’s most violent fugitives for BPD’s Homicide and Robbery Units.

After working stints in Patrol, Investigations, and Dignitary Protection, Deputy Chief Pickett was promoted to the rank of Sergeant. Upon advancing to the rank of Lieutenant, he became Commander of the department’s City Wide Traffic Task Force, Executive Protection Unit, and Security Services Division.  Deputy Chief Pickett has most recently been assigned to be the Law Enforcement Branch Director for the World Games 2022.