The Birmingham Police Department reports detectives have obtained a warrant for an arrest in connection to the murders of Joseph Demetrice Robinson and Rikki Dunri Christopher Bynum.

The suspect has been identified as:
Antonio Shaw, (27), B/M, of Birmingham, Alabama. 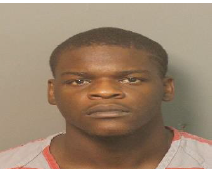 Birmingham Police Detectives presented information on the case to the Jefferson County District Attorney’s Office. After an assessment of the information, detectives obtained warrants for: Capital Murder X’s 2 (No Bond-each count), Attempted Murder X’s 2 ($60,000-each count), Shooting into an Occupied Vehicle ($15,000).

Antonio Shaw was taken into custody near the scene by patrol officers after a community member assisted officers on the scene of the shooting by providing a description of Antonio Shaw when he fled on foot.

Antonio Shaw is currently in the custody of the Jefferson County Jail Staff.

The Birmingham Police Department reports the Jefferson County Coroner’s Office has identified the victims of a homicide that occurred on Saturday, June 5, 2021.

The preliminary investigation suggests the suspect fired upon the victims while they were in the parking lot of Circle K (232 Roebuck Plaza Drive). The suspect then fled on foot. A community member provided a suspect description to patrol officers which helped lead to the capture of the suspect in the 9100 block of Parkway East.

The Birmingham Police Department is conducting a double homicide investigation. The incident occurred on Saturday, June 5, 2021.

The victims will be identified upon notification to the next of kin.

At approximately 9:00 p.m., an East Precinct officer was travelling in the 200 block of Roebuck Plaza Drive when he heard gunshots being fired in the parking lot of 232 Roebuck Plaza Drive (Circle K). Officers then responded to the parking lot where they observed three male victims, near a parked vehicle, suffering from an apparent gunshot wound. Birmingham Fire and Rescue personnel pronounced two of the males deceased on the scene. The third male victim was transported to a local area hospital with non-life-threatening injuries.

A community member at the service station provided a detailed description of the shooter to officers on the scene. Based on the community member coming forward, patrol officers were able to take a person of interest into custody at 9170 Parkway East (Pizza Hut). The person of interest will be questioned by Homicide Division detectives. The motive appears to be unclear in this double homicide.