Arrest Made in Homicide

The Birmingham Police Department reports an arrest has been made in connection to the murder of Anthony Jackson Jr. The homicide occurred on Monday, June 14, 2021 in the 1500 block of 29th Street Ensley.

The suspect has been identified as:
Darric Hall, (30), b/m, of Fairfield, Alabama. 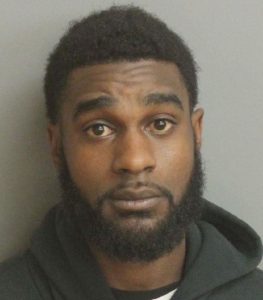 Shortly after the incident, officers were involved in a vehicle pursuit with the suspect in the City Limits of Brighton, however the suspect was able to avoid apprehension. Darric Hall was arrested and taken into custody on Saturday June 19, 2021. Hall will be held in the custody of the Jefferson County Jail with no bond.

The Birmingham Police Department reports detectives are conducting a homicide investigation. The incident occurred on Monday, June 14, 2021 in the 1500 block of 29th Street Ensley.

Just after 2:00 p.m., officers from the West Precinct responded to a call of a person down at the location. Officers arrived and discovered the victim, Anthony Jackson unresponsive inside of a pick up truck. Jackson was shot multiple times. Birmingham Fire and rescue responded to the scene and pronounced the victim deceased.

The preliminary investigation indicates the victim, was inside of his truck at the location when a suspect driving a silver SUV fired several times striking the victim. Detectives believe Jackson was targeted. The suspect fled the scene prior to officers arrival.

If there is anyone who has information pertaining to the case, please contact the B.P.D. Homicide Unit @ 205-254-1764 or Crime Stoppers @ 205-254-7777.
Anonymous tips can also be submitted to Crime Stoppers through the Birmingham Police Department’s Mobile App. Simply download the app and submit a tip.
Updates will be provided as information comes available.