The Birmingham Police Department reports detectives have obtained warrants for an arrest in connection to a robbery (carjacking) investigation which occurred in the 1100 Block of Reverend Abraham Woods Junior Boulevard.

The robbery occurred on Sunday, August 28, 2022, when a community member was carjacked at gunpoint in the 1100 Block of Reverend Abraham Woods Junior Boulevard.

On Monday, August 29, 2022, at around 5:15 PM, the Birmingham Police Department’s Real Time Crime Center was able to provide a location for the carjacking vehicle (White Toyota 4Runner).

A North Precinct officer spotted the victim’s vehicle in the 600 Block of Graymont Avenue. The vehicle accelerated before officers could initiate a traffic stop. A high-speed chase ensued when officers pursued the suspect’s vehicle to the 3000 Block of 29th Avenue North. The suspect’s vehicle collided with a Max Bus Stop sign and into a concrete barrier.

Two male suspects fled from the vehicle on foot; officers pursued them and were able to take both males into custody. During the foot chase, two officers were injured. A male officer suffered a serious leg injury requiring hospitalization and surgery. A female officer suffered minor injuries requiring her to be transported to the hospital for observation.

Both officers have been discharged from the hospital and are at home recovering. The Birmingham Police Department’s Peer Support Unit was deployed and aided the officers.

The suspect was identified as the driver of the vehicle. A stolen handgun and ski mask were recovered on the scene.

Detectives interviewed the suspect at BPD Headquarters; detectives observed evidence that led them to believe the suspect was involved in the original carjacking incident. The second male suspect was released.

The suspect will be held in the custody of the Jefferson County Jail under bonds totaling $77,500. 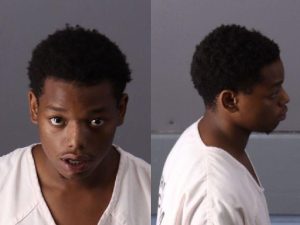