Homicide Investigation Update
The Birmingham Police Department reports an arrest has been made in the connection
to the homicide of Joe Albert Foster IV. The victim was murdered on Tues, July 2020, at
the Villas at Westridge Apartment Complex located in the 2300 Block of Court R. 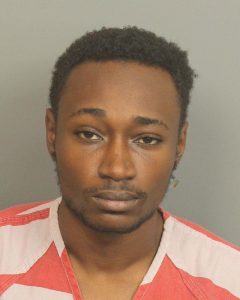 The suspect has been identified as:
Myles Cordell Amerson, (21), B/M, of Birmingham, Alabama.
BPD Detectives presented information gathered on the case to the Jefferson County
District Attorney’s Office. After an assessment of the case detectives obtained a Murder
warrant for Myles Cordell Amerson. Amerson has been arrested and will be held in the
custody of the Jefferson County Jail with a $60,000 bond.
See attach mugshot photo.

The Birmingham Police Department reports detectives are conducting a homicide
investigation. The incident occurred on Tuesday, July 28, 2020.
The victim has been identified as Joe Albert Foster IV, (21), B/M, of Birmingham,
Alabama.

At approximately 12:21 a.m., West Precinct Officers responded to a shots fired call in the
2300 block of Court R at the Villas as Westridge Apartment Complex. Officers arrived and
was notified by a resident of gunfire heard from an adjacent apartment. Upon further
investigation, officers observed through a window a person lying on the floor.

After gaining
entry, officers discovered the victim unresponsive suffering from a gunshot wound.
Birmingham Fire and Rescue along with Jefferson County Coroner responded to the
scene and pronounced the victim deceased.

Details are limited in this investigation. There are no suspects in custody and Detectives
have not developed a motive. Updates will be provided as details come available.
If there is anyone who has information pertaining to the case, please contact the
B.P.D. Homicide Unit @ 205-254-1764 or Crime Stoppers @ 205-254-7777.
This is Birmingham’s 58

The information is based on a preliminary and ongoing investigation, which continues to evolve as investigators
interview witnesses, review physical and electronic records, and analyze forensic evidence. The Department’s
understanding of the facts and circumstances may change as additional evidence is collected and analyzed