The Birmingham Police Department reports detectives have obtained a warrant for an arrest in connection to the murder of Eric Henderson on Monday, November 22, 2021.

Officers took the suspect into custody at the scene of the incident. Birmingham Police Detectives presented information on the case to the Jefferson County District Attorney’s Office. After an assessment of the information, detectives obtained a warrant for Murder (Bond $100,000).

The suspect is currently in the custody of the Jefferson County Sheriff’s Office. 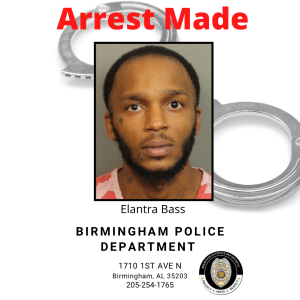 The victim has been identified as Eric Henderson, (26), of Birmingham, Alabama.

At approximately 2:53 p.m., officers responded to East Precinct on a call of a person down inside an apartment located at #14 Watertown Circle. Officers arrived and discovered a person deceased inside of a kitchen pantry closet. The victim was pronounced deceased by the Jefferson County Coroner.

The preliminary investigation indicates an off-duty officer investigated a complaint which lead to the discovery of the body. Three suspects were detained and questioned by detectives. An arrest has been made; however formal charges are pending with the Jefferson County District Attorney’s Office.

**The information is based on a preliminary and ongoing investigation, which continues to evolve as investigators interview witnesses, review physical and electronic records, and analyze forensic evidence. The Department’s understanding of the facts and circumstances may change as additional evidence is collected and analyzed. **