The Birmingham Police Department reports detectives have obtained a warrant for an arrest in connection to the murder of Donnika Sills which occurred on Sunday, November 28, 2021, in the 100 block of 3rd Avenue North.

On Tuesday, November 30, 2021, Birmingham Police Detectives presented information on the case to the Jefferson County District Attorney’s Office. After an assessment of the information, detectives obtained a warrant for Capital Murder (no bond). 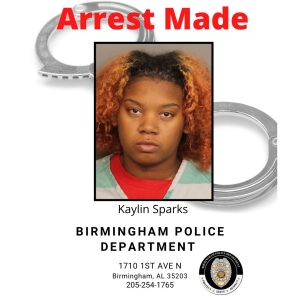 The Birmingham Police Department is conducting a homicide investigation. The incident occurred on Sunday, November 28, 2021.

At approximately 3:30 a.m., North Precinct officers responded to the 100 block of 3rd Avenue North after hearing gunshots fired. Shot Spotter also alerted officers that over 10 rounds were fired in the area. Officers arrived on the scene and discovered the victim lying unresponsive on the ground near the roadway suffering from an apparent gunshot wound.

The preliminary investigation suggests the shooting may have stemmed from a verbal argument that transpired earlier between the victim and an unknown suspect(s). Currently, there is no one in custody.