The Birmingham Police Department reports that detectives are conducting a robbery investigation. Investigators request assistance from the public in identifying the suspect in the attached robbery photo.

At approximately 10:23 p.m. on Wednesday, December 4, 2019, the suspect kidnapped a female at gunpoint in the 1700 block of 11th Place South. The suspect forced the victim into her vehicle and drove to various locations attempting to withdraw money from the victim’s credit cards. The suspect also sexually assaulted the victim before letting her go. After the sexual assault, the suspect left in an unknown direction on foot.

If there is anyone with information on the identity and location of the suspect, we ask that they contact the BPD Special Victims Detectives at 205-297-8437 or remain anonymous by contacting Crime Stoppers at 205-254-7777.  If the tip to Crime Stoppers leads to an arrest, Crime Stoppers will provide a cash reward. 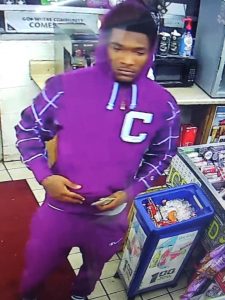 A surveillance photo of the suspect is attached.