The Birmingham Police Department reports that detectives are conducting a robbery investigation. Investigators request assistance from the public in identifying the suspect in the attached robbery photos.

at approximately 10:06 a.m. on Monday January 6, 2020, the suspect entered the Wendy’s restaurant located at 345 Valley Avenue. Upon entering, the suspect walked to the counter and placed an order. The suspect began to remove his wallet from his pocket as if he was about to pay, but then presented a handgun and demanded money from the register. The suspect managed to get money from the register before fleeing on foot behind neighboring businesses. The suspect wore a red and gray Alabama toboggan and red Alabama jacket which was later located behind a neighboring business. There were no injuries during the robbery.

Surveillance photos of the suspect are attached. 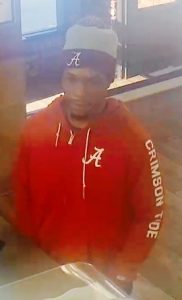