Arrest Made in Assault Investigation of a 2-Year-Old

The Birmingham Police Department reports arrest have been made in an assault investigation involving a 2- year-old wounded by gunfire.

The incident occurred Saturday, February 27, 2021 at a residence in the 200 block of Boxwood Circle. The child has undergone several surgeries and is listed in stable condition. 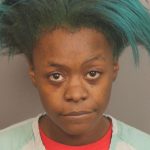 This investigation is ongoing for additional suspects.

Click below to print:
Media Release 56- Arrest Made in Assault of 2- Year-Old

The Birmingham Police Department reports detectives are conducting an investigation of a 2-year-old wounded by gunfire. The incident occurred Saturday, February 27, 2021.

Just after 2:00 a.m., the Birmingham Police Department’s 911 Communication Division received a call of a 2-year-old shot. The child was transported to St. Vincent’s East by personal vehicle. The child injuries are life threatening. It was determined the incident occurred in the vicinity of the 200 block of Boxwood Circle.

The preliminary investigation indicates an altercation occurred amongst adults which escalated to shots being fired. No arrest has been made in this investigation. Updates will be provided as this case develops.