The Birmingham Police Department reports detectives are conducting a robbery investigation. Detectives requests assistance from the public in identifying a suspect in the attached video and photos.

On Friday, March 25, 2022, a community member was robbed at gunpoint of personal belongings in the 700 block of Valley Avenue. The suspect was armed with a handgun and fired shots at the victim. A service station nearby captured video and photos of the suspect.

Please see the attached video and photos featuring the suspect in this investigation. 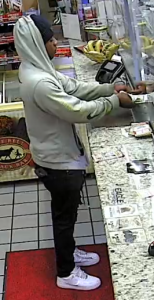