Person of Interest Wanted for Questioning

Person of Interest Wanted for Questioning

The Birmingham Police Department is enlisting help from public in locating a person of interest in connection to the  double homicide of 16-year-old Yasmine Wright and 49-year-old Ed Franklin Harris. The incident occurred on Saturday, January 8, 2021 at 16th Way Southwest and Matt Leonard Drive in Birmingham. 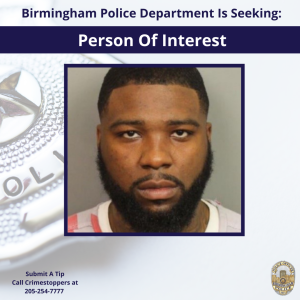 The person of interest has been identified as:

Lumpkin is known to frequent the Ensley/Central Park area.

The victim has been identified as Ed Franklin Harris, (49), b/m of Birmingham, Alabama.

The victim has been identified as Yasmine Wright, (16), b/f of Birmingham, Alabama.

At approximately 9:15 p.m. officers responded to a call of a person shot at the location. Responding officers discovered an adult male, Franklin Harris laying unresponsive in the middle of the road next to a motorcycle. Harris suffered from an apparent gunshot wound and was pronounced deceased on scene by Birmingham Fire and Rescue. Officers and detectives were also alerted of another gunshot victim, sixteen year old Yasmine Wright was transported by personal vehicle to Birmingham Fire Station 25 located at 3015 Wilson Road. Birmingham Fire and Rescue transported the victim to UAB Hospital where she succumb to her injuries.

The preliminary investigation suggest Ed Franklin Harris turned onto 16th Way Sw and laid the motorcycle down in the roadway. The suspects drove onto a grassy area at the intersection and stopped. The suspect(s) reportedly exited the vehicle and fired shots fatally wounding Harris. Sixteen-year-old, Yasmine Wright was the passenger in a vehicle passing in the area when she was struck by gunfire. The suspect(s) fled the scene on foot in an unknown direction. The suspect(s) is at large.

This is Birmingham’s 6th and 7th   murder investigation of 2022.