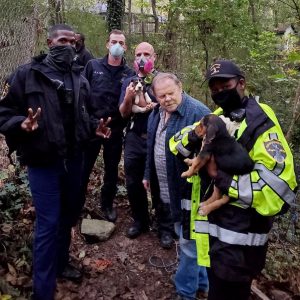 A couple of curious puppies recently fell down a deep rabbit hole and two BPD officers responded to the owners’ call for help.

“I went to check on my puppies after the big storm and discovered two out of five were missing, so Thelma Lou here and Andy were gone,” Owner Linda Maxey said. “Thelma Lou is the instigator –she likes to explore. She had found  a seven to 10 foot hole and had fallen in and, of course, naturally, her little tailgater Andy here followed her.” 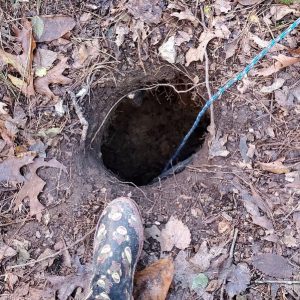 The puppies all share names reminiscent of characters from The Andy Griffith Show and the scene was like one from Mayberry. Officer Raven Walker and Officer Brandon Jones responded along with local firefighters.

“We got there, the owner was in distress and just wanted her puppies to be rescued and be saved so Officer Walker and I were like ‘Hey! We got to do something about it,” Officer Jones said.

Officer Walker said she was both excited and emotional about the situation.

Officer Jones said one of the owners family members had tried to get them out prior to calling for help, but was unsuccessful.

“What we did was, Officer Walker [and]  myself, Birmingham Fire & Rescue got together and made some ropes and strings and pulled the puppies out.”

Maxey said she felt tremendous relief when the puppies were rescued.

“I can only imagine being in a dark, dark cold wet hole all night long, without their mama,” Maxey said. “I felt wonderful after the fire department and the police department were able to rescue them.”

Officer Walker said she is very proud of everyone who responded.

“We were all able to get the job done and that’s to protect and serve our community and the puppies are included in our community as well,” Officer Walker said.