The Birmingham Police Department reports detectives are conducting a robbery investigation. Detectives requests assistance from the public in identifying a person of interest in the attached photo.

On Tuesday, May 18, 2021, at approximately 7:30 p.m., an unknown black male entered CVS Pharmacy, located at 1675 Montclair Road, approached the front corner and passed the associate a note demanding narcotics. The male was described as a black male with a beard wearing a grey shirt, black pants, and a cap possibly with dreadlocks. The male portrayed as though he was armed with a handgun. The suspect obtained an unknown amount of narcotics from the business then fled the scene.

Please see the attached photo featuring the person of interest in this investigation. 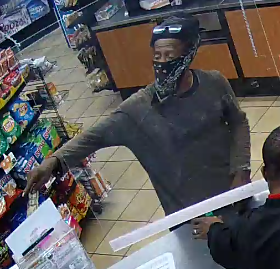