The Birmingham Police Department reports that an officer involved shooting investigation is underway. On Sunday, January 26, 2020, at 9:22 a.m. an off-duty uniformed officer was working an extra security detail in the 5600 block of Georgia Road.

While outside the officer observed a suspect vehicle believed to be involved in a recently reported robbery near his location. The officer confronted the suspects in the 5400 block of Georgia Road and gunfire was exchanged between the officer and suspect. During the exchange the officer was struck by gunfire and seriously injured.

Suspect information will be released pending completion of warrant procedures but one suspect is 16 years old and the second suspect is 25. The 16 year old is believed to be the shooter.

The injured BPD officer has been identified as:

Detective Finke remains in serious condition and has undergone surgery.

The officer involved shooting investigation will be conducted by the Alabama Bureau of Investigation.

A photo of Detective Finke is attached. 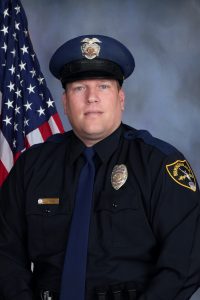