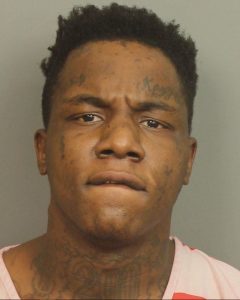 The Birmingham Police Department reports an arrest has been made in connection to the homicide of Mikos Lewis.
The suspect identified as Keleen Connell (25), B/M, of Birmingham, Alabama was taken into custody on August 31, 2020. A search warrant was executed where Connell was apprehended and taken into custody. Connell will be held in the custody of the Jefferson County Jail with a $150,000 bond.

The suspect has been identified as
Keleen Connell, (25), B/M, of Birmingham, Alabama

Detectives presented information gathered on the case to the Jefferson County District Attorney’s Office for review. After the assessment of information, BPD Detectives obtained a Murder Warrant for Keleen Connell. Connell is currently at large.

If there is anyone who has information pertaining to the whereabouts of Keleen Connell, please notify authorities any contacting 911 or Crime Stoppers @ 205254-7777. Please do not approach, Connell may be armed and dangerous.

Homicide Investigation Update
See Original Release Below
The Birmingham Police Department reports Jefferson County Coroner’s Office has identified the victim of a homicide that occurred on Tuesday, July 7 2020.
The victim has been identified as Mikos Labron Lewis, (30), B/M, of Birmingham, Alabama.

Homicide Investigation
Media Release 141
The Birmingham Police Department reports detectives are conducting a homicide investigation. The incident occurred on Tuesday, July 7, 2020.
The victim’s identity will be release upon identification and notification of next of kin.
Just after 11:30 p.m., officers from West Precinct responded to a residence in the 5300 block of Court Q on reports of a person shot. Upon arrival officers discovered the victim inside the residence on the floor unresponsive suffering from a gunshot wound. Birmingham Fire and Rescue responded and pronounced the victim deceased as a result of injuries.
The preliminary investigation indicated another resident arrived home and discovered the victim unresponsive. Additional details and leads are limited in this investigation. Detectives have not established a motive and there are no suspect(s) in custody. This is an ongoing investigation. Additional details will be provided as they come available.
If there is anyone who has information pertaining to the case, please contact the B.P.D. Homicide Unit @ 205-254-1764 or Crime Stoppers @ 205-254-7777.