The Birmingham Police Department reports that two suspects have been charged in connection with an officer involved shooting investigation. The incident occurred on Wednesday, November 20, 2019.

At approximately 9:41 p.m., two North Precinct officers approached a vehicle in an apartment complex parking lot located at 2024 30th Avenue North. As the officers approached the vehicle a gunshot was fired from the area of the suspects’ vehicle. One Birmingham Police officer discharged a weapon during the incident grazing one suspect in the arm. Officers were able to take three subjects into custody at the scene. The injured suspect was treated on the scene but refused additional treatment at the hospital.  No officers were injured during the incident.

Demarieo McGee, B/M, 23, of Birmingham, Alabama. Two Attempted Murder warrants have been obtained against the suspect. (Grazed during shooting)

Monquez Johnson, B/M, 25, of Birmingham, Alabama. An Obstruction of Justice warrant has been obtained against the suspect.

Both suspects remain in the custody of the Birmingham City Jail. The third suspect was released. Mugshots of the suspects are attached.

The Alabama Bureau of Investigation will continue to investigate the officer-involved shooting. 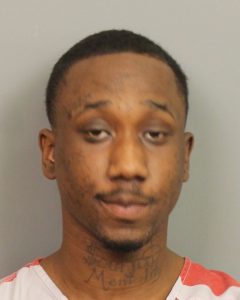