The Birmingham Police Department reports an arrest has been made in the murder of Bryce Landrus Berry. Berry was murdered on Tuesday, August 24, 2021. 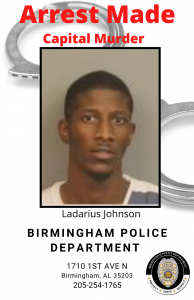 Detectives presented the information gathered to the Jefferson County District Attorney’s Office for review. After an assessment of the case, a Capital Murder warrant was issued for the arrest of Ladarius Johnson. Johnson will be held in custody of the Jefferson County Jail with No Bond.

The victim has been identified as Bryce Landrus Berry, (26), of Birmingham, Alabama.

At 4:09 p.m. the officers from West Precinct responded to a call of a person shot. Officers arrived and discovered the victim lying on the ground next to his vehicle. The victim sustained multiple gunshot wounds. Birmingham Fire and Rescue personnel responded and the victim was pronounced deceased on the scene.