The Birmingham Police Department reports that detectives have obtained warrants in a robbery investigation that’s related to an officer involved shooting investigation.

On Sunday, January 26, 2020, at 9:22 a.m. an off-duty uniformed officer was working an extra security detail in the 5600 block of Georgia Road. While outside the officer observed a suspect vehicle believed to be involved in a recently reported robbery near his location. The officer confronted the suspects in the 5400 block of Georgia Road and gunfire was exchanged between the officer and suspect. During the exchange the officer was struck by gunfire and seriously injured. The suspects managed to escape the location by fleeing in the suspect’s vehicle. Additional officers were called to the area to search for the suspect, but the suspects were not located in the immediate area. Upon relaying the suspect information to responding police personnel and utilizing additional resources, the suspects were located in the 2200 block of Bessemer Road. Two black male suspects were taken into custody without further incident. Responding officers located property that was reported taken during the robbery along with a handgun.

The injured BPD officer has been identified as:

Chris Leon Burke, B/M, 25 of Birmingham, Alabama. Two Robbery first degree warrants have been obtained against the suspect. $250,000.00 bond on each warrant.

The second suspect is 16 years old and has been charged by BPD investigators with Robbery first degree with a $250,000.00 bond on each charge. The officer involved shooting investigation will be conducted by the Alabama Bureau of Investigation against the 16 year old suspect.

Both suspects are in the custody of the Jefferson County Jail.

Although there is additional medical treatment ahead, Detective Finke, has made tremendous improvement in his recovery.

A mugshot photo of Chris Burke is attached. 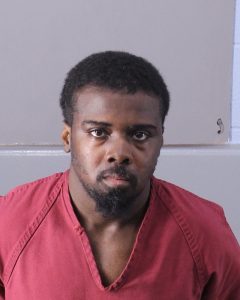