The Birmingham Police Department reports detectives are conducting a robbery investigation. Detectives requests assistance from the public in identifying a suspect in the attached photo and video.

On Sunday, October 23, 2022, the Best Convenience Store (1744 Pearson Avenue Southwest) was robbed at gunpoint. The suspect reportedly walked into the business and pointed a handgun at the store associate; he stole merchandise from the business and then left on foot. No injuries were reported.

The suspect was described as a black male wearing a yellow shirt and black and white jogging pants; he was armed with a handgun.

Please see the attached photo and video featuring the suspect in this investigation. 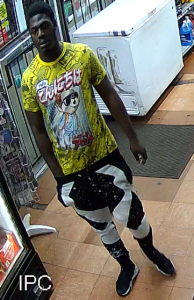