The Birmingham Police Department reports detectives have obtained a warrant for an arrest in the connection to the murder of Zevin Lenard Patterson who was shot and killed on Saturday, November 19, 2022, while in the 200 block of 59th Street South.

Birmingham Police Detectives presented information on the case to the Jefferson County District Attorney’s Office. After an assessment of the information, detectives obtained a warrant for Murder with a bond of $250,000.

Devin Patterson Jr. is not in custody. He is described to be 5’7”and about 145 lbs. It is believed that he fled the scene with the firearm used in the murder of Zevin Patterson. We encourage anyone who encounters him to not approach and to call police immediately as he may be armed.

If there is anyone who has additional information pertaining to the case, please contact the B.P.D. Homicide Unit @ 205-254-1764 or Crime Stoppers @ 205-254-7777. Anonymous tips can also be submitted to Crime Stoppers through the Birmingham Police Department’s Mobile App on Android or IOS devices. Updates will be provided as information comes available. 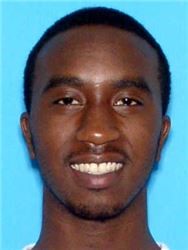 The Birmingham Police Department is conducting a homicide investigation. The incident occurred on Saturday, November 19, 2022.

At approximately 9:56 PM, East Precinct officers were dispatched to Don L. West Manor Apartments located at 204 59th Street South on a call of a person shot.

Upon arrival officers observed the victim suffering from a gunshot wound in an apartment at the complex. Birmingham Fire and Rescue personnel arrived at the scene and pronounced the victim deceased.

Preliminary investigation suggests there was an altercation between family members prior to the shooting.

Currently, there is no one in custody.