One In Custody after Pursuit with Stolen Vehicle

The Birmingham Police Department reports a suspect was taken into custody after leading officers on a pursuit in a stolen vehicle. 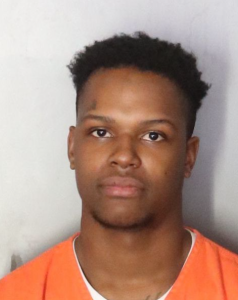 On Tuesday, November 2, 2021, at around 8:30 p.m., a West Precinct officer observed a stolen white Dodge Challenger while patrolling around 25th Street Ensley and Avenue J. The vehicle was stolen on October 10, 2021 in a carjacking were the suspects were armed with a rifle and handgun.

Officers attempted to conduct a traffic stop on the vehicle; however, the vehicle’s driver refused to stop. During the pursuit, the suspect collided with two patrol vehicles causing minor damage. The suspect’s vehicle eventually came to a stop in the 1500 block of Avenue C after the driver lost control and was involved in a single-car accident. Patrol officers took the driver into custody. There were no injuries to any officers.

The suspect was transported to a local-area hospital for medical treatment related to the traffic accident. The suspect will be booked into the Birmingham City Jail pending vehicle-theft related charges. Robbery detectives are investigating whether the suspect was involved in the initial carjacking robbery.

If there is anyone with information on the suspect shown in the photos, please contact BPD Robbery Detectives at 205-254-1753 or provide an anonymous tip to Crime Stoppers at 205-254-7777.

Media Release 262- One in Custody After Pursuit