The Birmingham Police Department is seeking assistance from the public in locating a suspect involved in a robbery and assault at Metro PCS located at 800 Graymont Avenue. The incident occurred on October 30, 2020.

Please do not approach, Johnson is considered armed and dangerous.

If there is anyone who has information pertaining to the whereabouts of Daniel Johnson, please notify authorities any contacting 911 or Crime Stoppers @ 205-254-7777. 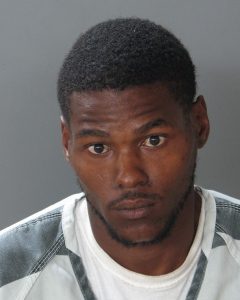 The robbery occurred on Friday, October 30, 2020. At approximately 6:15, officers from the West Precinct responded to a robbery call at Metro PCS located at 800 Graymont Ave. Officers arrived and was met by the store clerk who sustained a gunshot wound to the chest. Birmingham Fire and Rescue responded to the scene and the clerk was transported UAB Hospital with life threatening injuries.

The preliminary investigation suggest the suspect (pictured) entered the location and spoke with the employees behind the counter. Once all of the customers exited the store, the suspect pulled a firearm and demanded U.S. currency. During the robbery, the suspect shot one of the employees. Store clerk and fled from the location on foot.
If there is anyone who has information pertaining to the case, please contact the B.P.D. Robbery/Homicide Unit @ 205-254-1764 or Crime Stoppers @ 205-254-7777.