Homicide Investigation Update
The Birmingham Police Department reports a suspect has been charged in connection with a homicide investigation. The incident occurred on Sunday, October 27, 2019 at approximately 7:15 p.m.
The deceased has been identified as: Gjamal Antonio Rodriqcus, B/M, 27 of Birmingham, Alabama.
The suspect has been identified as: Darius Frazier, B/M, 22 of Birmingham, Alabama. A Capital Murder warrant has been obtained against the suspect. Detectives also obtained an Attempted Murder warrant against the suspect. No bond on the warrants. Officers from the East Precinct responded to a call of an altercation at 102 Shawnee Lane. Upon arrival officers located two victims inside of a vehicle suffering from gunshot wounds. Both victims were transported to UAB hospital by Birmingham Fire & Rescue for treatment. Detectives were later notified that the victim had succumb to his injury and was pronounced deceased by hospital staff.
Investigators learned that the victim and suspect were involved in a heated argument prior to the shooting. The second victim is expected to recover from her injury.
The suspect is in the custody of the Birmingham City jail and will be transferred to the custody of the Jefferson County Jail. 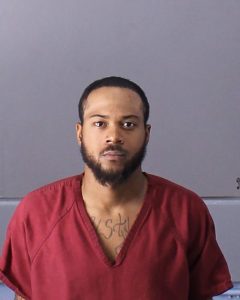 A photo of the suspect is attached.