The Birmingham Police Department reports arrest have been made in connection to the murder of Michael Alexander McGee. McGee was murdered on Sunday, September 27, 2020. 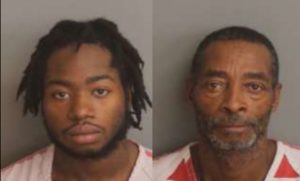 On January 14. 2021, detectives presented the case to the Jefferson County District Attorney’s Office for review. After an assessment of the information, detectives obtained outstanding Murder warrants (bond $60,000.00) for each of the listed suspects. Curtis and Joshua Sanders was arrested on February 1, 2020 and will remain in the Jefferson County Jail.

The Birmingham Police Department reports detectives are conducting a homicide investigation. The incident occurred on Sunday, September 27, 2020 at approximately 2:15 p.m.

The victim has been identified as Michael Alexander McGee, (42), b/m, of Birmingham, Alabama.

Officers from East Precinct responded to the 3700 block of 42nd Street North on reports of three people shot. Upon arrival officers found the victim, Michael Alexander McGee lying on the side of the road suffering to a gunshot wound.

Birmingham Fire and Rescue responded and the victim was transported to UAB Hospital where he succumbed to his injuries. The medical condition of the other two wounded victims are unknown.

The preliminary investigation indicates a dispute occurred over parking spaces prior to shots being fired. There are no suspect(s) in custody. Updates will be provided as additional information comes available.