The Birmingham Police Department reports that a suspect has been charged in connection with a homicide investigation. The incident occurred on Sunday, November 24, 2019 at 12:30 a.m.

victim has been identified as:

Laeric Kejuandre Bailey, B/M, 19, of Birmingham, Alabama.  A Capital Murder warrant has been obtained against the suspect. The suspect is in the custody of the Jefferson County Jail without bond.

Officers from the West Precinct responded to a call of shots fired at #7 15th Street West. Upon arrival, officers located three victims suffering from non-life threatening gunshot wounds. A fourth victim was found to have suffered a life threatening injury and was transported to UAB hospital by Birmingham Fire & Rescue for treatment. Approximately two hour later investigators received information that the victim had succumbed to his injury and was pronounced deceased by hospital staff. Investigators later received additional information that a fifth victim arrived at the hospital suffering from a non-life threatening gunshot wound. All remaining victims are expected to recover from their injuries.

Investigators found that the shooting occurred after patrons were made to leave the club after a fight. The suspect drove past the location in a dark vehicle and began to fire at patrons as they stood in the parking lot. 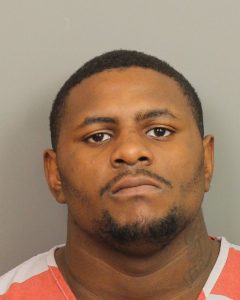