The victim has been identified as Kanisha Necole Fuller, (43), B/F, of Birmingham, Alabama.

At approximately 11:51 p.m., Officers from the West Precinct responded to a spot spotter call of several rounds fired in the 3000 Block of Pearson Ave. Officers arrived in the area which is Germania Park, and discovered a female victim inside of a vehicle suffering from multiple gunshot wounds. Birmingham Fire and Rescue responded and transported the victim to UAB Hospital with life-threatening injuries. Investigators were later notified that the victim succumb to her injuries and was pronounced deceased by hospital staff.

The suspect was later taken into custody at a residence on the Western Side of Birmingham and transported to Birmingham Police Headquarters for further questioning.

The suspect has been identified as:
Alfreda Fluker, (39), B/F, of Birmingham, AL.

Alfreda Fluker was with the Birmingham Police Department for 15 years and was assigned to the Crime Reduction Team. 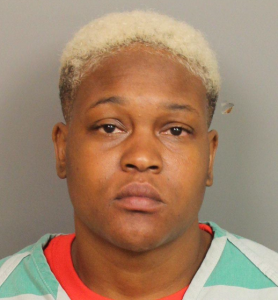