Recently an article was published indicating that the City of Birmingham had experienced 105 homicides during 2019. However, when you review the article you will find that the total number of homicides is completely different than what is reported by the Birmingham Police Department in accordance with the FBI Uniform Crime Reporting Program for law enforcement nationwide. The most accurate number for Birmingham homicide is 91, showing a 9% decrease from 2018.

The published article did something that is only germane to Birmingham. The author unnecessarily and erroneously combined “Homicides” with “Justifiable” to come up with their final number. This combination should never be done considering both are tabulated separately because a homicide is criminal offence and a justifiable has been deemed not a criminal offence. The key is found in the definitions for each.

Because justifiable killings are determined through law enforcement investigation and ruled by the District Attorney to be justifiable, they are tabulated separately in the FBI Uniform Crime Reporting from murder and non-negligent manslaughter. Here is the most realistic example of a justifiable homicide. An armed gunman goes into a church, pulls out a gun and starts shooting at church parishioners. One parishioner (private citizen) recognizes the danger, acts quickly to arm himself and shoot the felon in commission of the crime of murder before more innocent lives are lost. Should this parishioner be included in the count with the felon who entered the church to

deliberately and unlawfully kill another person? The answer is a resounding “No”. They should not because their actions were to save lives rather than kill.   Essentially, what this published article does, is criminalizes a private citizen who was acting in an Immediate Defense of Life situation to save lives. Again, this combination of “Homicide and “Justifiable” should NEVER be done.

The Uniform Crime Reporting (UCR) was established in 1929. In 1930 the FBI was tasked with collecting, publishing, and archiving reliable uniform crime statistics for the nation. For 90 years, this system has been in existence to ensure that a standard for measurement and systems of reliability to ensure all cities are evaluated the same for their effectiveness. The City of Birmingham has not been represented fairly, or in accordance with standardized practices.

When you combined “Homicide” and “Justifiable” it will upwardly skewed the total tabulation of criminal homicides offences in the City of Birmingham, which unnecessarily demonizes private citizens who are simply defending themselves from assaults. Birmingham should be measured with the same ruler of effectiveness as every other city in the nation with the UCR. A lot of great work has been done to reduce violence in the City of Birmingham and our crime reduction numbers reflect the full impact of those measures. 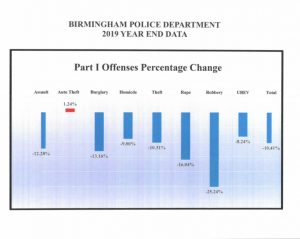