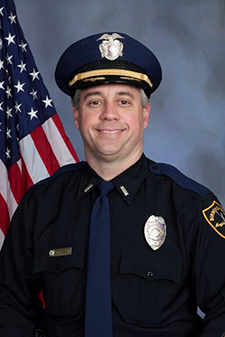 Lt. Majors began his career with the Birmingham Police Department on November 28th, 1994. After graduating the Police Academy in May of 1995, Frank Majors began an assignment at North Precinct. Frank Majors worked as a patrol officer from May of 1995 through January of 2001. During that time in patrol, he was assigned to beat 120 which encompassed the downtown business district for 4 years and then spent a year assigned to beat 124 which covered Carraway Hospital.

In January 2001 he was transferred to the Detective Bureau. Frank Majors began his assignment there in the Burglary Unit. He worked in Burglary from January 2001 through July 2002. In July he was transferred to Homicide where he was assigned until October 16th, 2003. On October 18th, 2003, Frank Majors was promoted to the rank of Sergeant and reassigned to West Precinct, Evening Shift.

Frank Majors worked as a Sergeant in the Patrol Division from October 2003 through July 2011. 3 and a half of those years were spent at West Precinct and from May 2007 through July 2011, he spent time as a Day Shift Sergeant at North Precinct.

In 2011, Frank Majors was again brought back to the Detective Bureau where he headed up Project I.C.E.and was the first sergeant ever assigned to the Intelligence Unit.

On 9/6/13, Frank Majors was promoted to the rank of Lieutenant. Lieutenant Majors worked as shift commander at East and South Precinct. He is currently assigned to the Community Services Division.