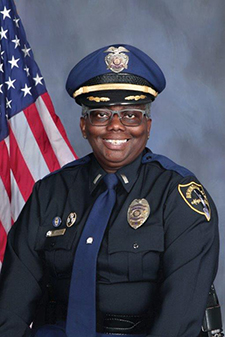 Lieutenant Payne along with her supervisors are tasked with security, safety and making sure that everyone that comes through the doors of the detention facility are treated with respect and dignity. In addition to being the Assistant Jail Administrator, she is also the Inside Commander of Legion Field Stadium. These duties required working with the staff of the stadium to work on an evacuation plan of the stadium and security staffing during all events held at Legion Field.

Lieutenant Payne was born and raised in the City of Birmingham, Alabama. She has over 31 years with the Birmingham Police Department. During her career with the Department, she served as a Patrol Officer at South Precinct for 9 years, Burglary Detective for a year. She received the promotion of Sergeant in April 1998 where she went on to work as an investigator in Internal Affairs until her promotion to Lieutenant in July 2011. Since then she has served in the capacity of Lieutenant at North Precinct for 2 years, Records Division for 4 years, South Precinct for 4 years and currently The Birmingham City Jail. Lieutenant Payne is a state licensed polygraphist with the State of Alabama.