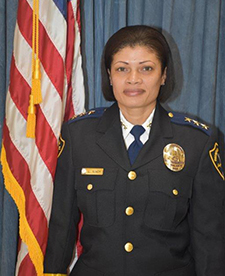 Mack began her career with the City of Birmingham as a Code Enforcement Inspector for the Department of Public Works (DPW) and later transferred to the police department. Throughout her law enforcement career, she has served in various assignments including patrol at three of the four precinct districts, police operations at the Birmingham-Shuttlesworth International Airport, and the Special Events Unit where she utilized the Incident Command System to manage large events and critical incidents for the city. Mack was also assigned to the Community Services Division and played a key role in restructuring and managing the Volunteers in Police Services (VIPS) and Internship programs consisting of more than 100 volunteers. She earned the Certification in Volunteer Administration (CVA) to demonstrate her commitment to excellent volunteer service. Recognized as a role model by others who aspire to achieve similar goals, Mack is committed to mentorship. To her credit, several Birmingham Police Officers started their career under her leadership. Most recently, she served as the Executive Assistant to the Chief of Police.

Furthermore, leveraging good judgment, strategic planning, strong interpersonal skills, and the ability to promote vision, work ethic, and accountability, Mack is credited as being the Executive Liaison for the Real Time Crime Center (RTCC) project team, and she currently oversees the RTCC daily operations, which have proven to enhance investigative measures and strengthen the BPD’s ability to combat violent crime.

Mack has maintained a record of success in applying management, creativity, and analytical abilities to represent the interests of the BPD and the community. Noteworthy contributions include (a) establishing a Memorandum of Understanding (MOU) between Lawson State Community College, Birmingham Municipal Court, and the Birmingham Police Department (BPD), (b) launching a General Educational Development (GED) Program inside the city jail, (c) and addressing the language barrier to improve relations with the Hispanic community through the development of a Spanish Training Program, “Being Bilingual on the Beat,” in partnership with several colleagues. She also spearheaded rebranding the BPD, developing core values, and improving accountability for sworn personnel through an enhanced conversion process for new service badges.

As a lifelong supporter of continued learning and advancement, Mack earned her Master of Business Administration degree in Project Management from Columbia Southern University and a Bachelor of Science degree in Organizational Leadership and Supervision from Purdue University. She also received numerous commendations and completed several training programs, including the Personnel Board of Jefferson County 360 Degree Leader Program and the City of Birmingham Management Program.

An advocate of transformational and servant leadership, Mack’s faith is firmly rooted in God. In her spare time, she enjoys traveling with her family, cooking, reading, and watching HGTV and the Food Network. With a history of proven leadership, paving the way for others through mentorship and succession planning, and fostering an atmosphere of cooperation and trust, Mack is dedicated to improving employee wellness, boosting morale, and implementing effective processes to enhance efficiency, customer service, and overall safety for a better quality of life in the City of Birmingham.

Assistant Chief Mack honors and appreciates others who paved the way.