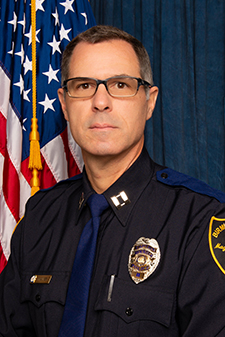 Captain Edmond Hanks began his career with the Birmingham Police Department in April of 1992. Upon graduation from the Birmingham Police Academy, he was assigned to the South Precinct’s evening shift as a patrol officer where he also served as a FTO (Field Training Officer) until 1999. Hanks was then reassigned to the Police Academy for three and a half years and served as the primary instructor for new police recruits. Hanks was certified as a recruiter for the Department as well as assisting with the hiring of new recruits, the FTO Program, Citizen’s Police Academy and in-service training.

In 2002 Hanks was promoted to the rank of sergeant and reassigned to the West Precinct where he served as a patrol supervisor for over six years on both evening and day shifts. In 2008 he was transferred to the Internal Affairs Division and served as an investigator until 2010. While serving at the rank of sergeant, Hanks also spent time in the Crime Scene Unit and at North Precinct as a patrol sergeant.

In 2011 Hanks was promoted to the rank of Lieutenant and reassigned to the East Precinct and served as the evening shift commander. In 2013 he was transferred to the Department’s Tactical Unit where he was the Executive Officer for over two years. In 2015 Hanks was reassigned to the Crimes Against Persons Division. During that time he was tasked with overseeing and implementing the Violence Reduction Initiative in partnership with John Jay College and the National Network for Safe Communities. In conjunction with the VRI, Hanks was the Commander over the Department’s Crime Reduction Team (Fugitive Apprehension), Neighborhood Enforcement Team (Gang Unit) and the Criminal Intelligence Unit. In 2018, Hanks served an additional tour at West Precinct as a shift commander.