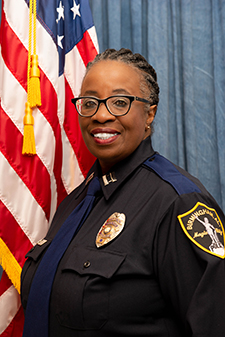 A native, of Birmingham, AL, Captain Janice Blackwell grew up in the College Hills neighborhood and is a product of the Birmingham School System. She graduated Magna Cum Laude and received her Bachelor of Science degree in Criminal Justice from Miles College. Captain Blackwell furthered her education by attending the Birmingham Easonian Baptist Bible College where she received a Bachelor of Arts in Christian Education in 2006. In 2012, she completed the FBI- Southern Law Enforcement Executive Development Seminar (SLEDS) and she has successfully completed the Personnel Board of Jefferson County (PBJC) executive level training courses which consist of MPACT – Managers Preparing to Accomplish Change Today, LEDGE – Leadership Development for Government Executives, and the 21 irrefutable Laws of Leadership, as well as the Supervisory Training Program.

In 1988, she embarked on an exciting and noble career as a police officer for the Birmingham Police Department. Throughout her 31 year career, Captain Blackwell has served in a wide variety of units as a patrol officer and supervisor for the Field Operation Bureau, burglary detective in the Investigative Bureau, and former Commander of the Special Victims Unit. Moreover, she has advanced through the supervisory ranks as Sergeant, Lieutenant, and elevated as Captain in 2013. She leads by example by having an understanding for police officers to conduct themselves with a courteous and professional demeanor toward citizens. Thus, following the Mission of the Birmingham Police Department to Protect, Serve, and Respect and honoring the Theme of the City of Birmingham – “Putting People First.”