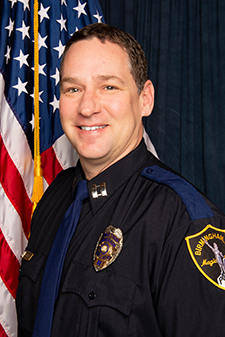 In November of 2019, Lieutenant Joe Roberts was promoted to the rank of captain.  He previously served as the North Precinct Evening Shift Commander from August 2013 until November 2019.  The Evening Shift consists of parts of B, C and D shifts along with the North Task Force, Civic Center Units and Railroad Park. Lieutenant Roberts oversees the daily operations of these units and insures proper coverage for all events. In addition, there are six sergeants and over forty officers under Lieutenant Roberts command that work diligently to bring down crime in the North Precinct area.

Captain Roberts is from central Tennessee area and has over twenty six years of law enforcement experience. He started his career at North Precinct and served as a FBI certified firearms instructor until being promoted to the rank of Sergeant in 2005.  He was transferred to South Precinct where he was assigned to the Evening Shift until being given command of the South Precinct Task Force.

Captain Roberts has a Bachelor of Science in Criminal Justice and a minor in Psychology from the University of Alabama in Birmingham. In addition, he has attended a variety of law enforcement classes covering all aspects of law enforcement.

Captain Roberts is married to Kristi Roberts and has one son.