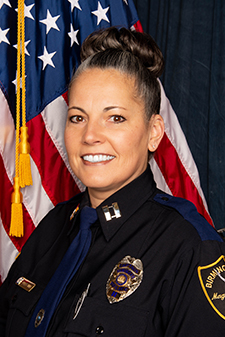 Captain Quigley-Vining has served with the Birmingham Police Department for more than 20 years. She started her career at South Precinct as a patrol officer in 1998. She also worked with the South Precinct Task Force investigating drug and property crimes before becoming a detective.

In 2000 she became a detective in the Investigative Bureau with the Vice-Narcotics Unit, where she was assigned to investigate narcotics and prostitution operations. During her tenure in Vice/Narcotics she had multiple assignments to include working on covert operations while assigned to the Federal Bureau of Investigations “Innocent Images” Task Force on Child Exploitation. She was also was a member of the entry team with special training in dynamic entries and diversionary devices.

In 2008 she was promoted to rank of Sergeant and was assigned to the Field Operations Bureau at West Precinct, where she supervised the H.I.C.O.P.P officers assigned to the Birmingham Housing Authority.

Captain Quigley-Vining returned to the Investigative Bureau where she was assigned to the Auto Theft Unit as a Detective Sergeant where she started the first “Bait Car” program for BPD and was featured on multiple “Tru TV” episodes which were filmed in Birmingham. The incorporation of this program helped decrease vehicle thefts in the city by 30% resulting in a substantial decline during her five year assignment between 2009-2013.

In 2013 she was promoted to the rank of Lieutenant and assigned to the Field Operations Bureau. She served at West Precinct and then East Precinct as a shift commander until 2017.

Captain Quigley-Vining currently serves on Birmingham Chief of Police, Scott Thurmond’s Command staff under the direction of Deputy Chief Ron Sellers . She is the Commander of East Precinct.

Captain Quigley-Vining earned her Bachelor of Science Degree in Criminal Justice from the University of Alabama in Birmingham. She is a member of the Fraternal Order of Police Lodge #1, FBI-LEEDA, MCJEA, IACP and NOBLE.