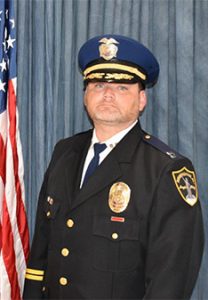 In 2015, Sellers was promoted to the rank of Sergeant. During Sellers’ tenure as a Patrol Sergeant, he had the pleasure of working at South and West Precinct as a shift supervisor. In 2018, Sellers took over the supervision of the BPD Property Room. During his tenure as Property Custodian, he streamlined the department’s online auction process and helped implement more efficient storage practices.

In 2019, Sellers was promoted to the rank of Lieutenant and assigned to South Precinct as the Delta Shift Commander. During his time at South Precinct, South had the lowest violent crime reduction of any of the four Precincts. Because of the effort from South Precinct personnel, South Precinct was voted Precinct of the Year. In December 2020, Sellers was reassigned to the Robbery/Homicide Section. During his tenure as Section Commander, he worked to increase the technology resources available to the Detectives and streamlined internal record keeping processes to help with unit efficiency.

In 2022, Sellers was promoted to the rank of Captain and currently serves as the Commander of the Crimes Against Person Division within the Investigative Bureau. The Division consists of the Robbery/Homicide Section and Special Victim Section.

Captain Sellers’ goal has always been to be the best officer and leader possible for the City of Birmingham. Since hired, he has sought out the best training opportunities available and mentored many to do the same. During his career, Captain Sellers has received numerous Commendation Letters and two Life Saving Medals.

Captain Sellers played football collegiately for the University of Arkansas at Pine Bluff (HBCU). He went on to complete his Bachelor of Business Administration and Master of Justice Administration degrees from Faulkner University.

When not working, Captain Sellers enjoys spending time with his family at Church or participating in multiple outdoor activities. On any given Saturday, the Sellers family can be found camping or running from one ballpark to another.