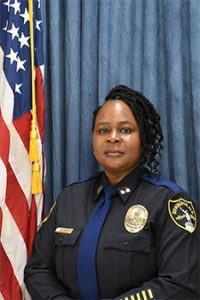 Captain Michelle Pruitt is a 24-year veteran of the Birmingham Police Department. She began her law enforcement career in 1998. After graduating from the Birmingham Police Academy, she was assigned to the East Precinct. During her tenure at East Precinct, she served as a patrol officer and task force officer, where she received several awards and commendations for outstanding work performance.

In 2008, she was promoted to Sergeant and assigned to the South Precinct (Morning Shift & Task Force). Additionally, she has supervised officers in the following precincts, divisions, and units: Vice/Narcotics Unit (Highway Interdiction & Weed and Seed), Community Policing and Revitalization, Business Compliance, West Precinct (Day Shift), and Community Service Division (School Resource Officers, Police Explorers Program, Chaplaincy Program, College Internship Program, Ride-Along Program, and Volunteers in Police Services). Throughout her career, she has been influential in enhancing community partnerships and was instrumental in improving the relationship between the police department and the citizens of Birmingham. She managed and coordinated the Citizens Police Academy Program, Birmingham Citizens Police Academy Alumni Association, Citizens on Patrol Program, and the Shadow an Executive Program. In 2016, she was responsible for the overall content and development of the Birmingham Police Department’s “Legacy Album.”

In 2018, she was promoted to Lieutenant and served as the Evening Shift Watch Commander at the East Precinct. In 2019, she was transferred to the Investigative Operations Bureau, assigned to the Crimes Against Persons Division, Robbery/Homicide Section, and later assigned to the Special Victims Section. In July of 2020, Pruitt was promoted to Captain and served as the Commanding Officer of North Precinct until being reassigned to the Professional Development and Accreditation Division in 2021. In August 2022, Pruitt was reassigned as the Commanding Officer of the Property and Records Management Division.

Captain Michelle Pruitt is a native of Birmingham and graduated from A. H. Parker High School. She earned a Bachelor of Science Degree from the University of Alabama at Birmingham. Pruitt has completed the Jefferson County Personnel Board’s Leadership certificate program (360 Leader), Jefferson County Personnel Board, MPACT – Managers Preparing to Accomplish Change Today certificate program and the City of Birmingham Supervisory/ Management certificate program. She has also received the following awards and recognitions: Torchbearer Leadership Award, Leadership in Community Policing Award, On the Front Line of Excellence Awards, and Loyal Service and Dedication Award. She is a member of the Fraternal Order of Police Lodge #1, FBI-LEEDA, MCJEA, and IACP.